Florida has a rich and diverse ecosystem. This wonderful paradise is teeming with life – land, sea and air. And one of the many things you can do to appreciate it is by bird watching.  Florida has an endless number of great spots to watch birds. It doesn’t matter which season of the year you do it, birds even migrate here in winter! Many other species stop by to rest along the rivers, lakes and marshes.  Whether spotting for waders and duck to mighty birds of prey, common and rare, southwest Florida has definitely something to offer.

Here are the top 5 commonly seen birds in southwest Florida

Regarded as a symbol of American Freedom, the Bald Eagle is such a sight to behold. With its wingspan that goes beyond two meters in length, its iconic dark brown feathers, white feathered head and golden beak, it has captured the hearts and minds of all those who’ve seen it in all its majestic glory. Come and see the Bald Eagle in action as it swoops down to catch a meal and send you the message that he’s the top predator around here.

It is a large owl typically found across the country.  It has a distinct howl that you will surely want to check out.  It feeds on rats, squirrels, rabbits, possums, moles and snakes just to name a few. This means that they not only help the eco system run, they also make good pest control.  And did you know that they sometimes take the nests of other birds who have abandoned their nests?

Ospreys are very common around Florida. These medium sized hawks are typically found along the beach areas as they seem to be enjoying alongside the locals and the tourists.  They normally dive for fishes, and capturing it in video or in photos is nothing short of excellent. So, get your lenses ready because these birds of prey will definitely not disappoint you.

Now, we’ll close this article with another hawk but by no means an insignificant one. The Red Shouldered Hawk can be seen all year round. You can’t miss it with its dark and white checkered wings; light streaked with dark. Its chest is white with a splash of red so that’s where probably it got its name. They hunt reptiles, small mammals and amphibians such as mice, frogs and snakes. Take a trip down through the trails in one of southwest Florida’s woods and you may just spot a nest or two. 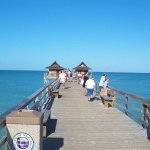 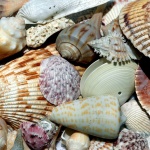 Collecting Seashells in Naples, FLArticles
This site uses cookies to improve the user experience, by continuing to browse this site you AGREE to our use of cookies.OK