One of the huge misconceptions with regards to the history of Naples, Florida is that there is not much to tell about it. Nothing could be farther from the truth. The history of Naples, Florida spans 500 years, as long as modern history itself; and if you are to look for further archeological clues, you will learn that it can reach way back to 10,000 years ago when mighty Sabertooth cats roamed the clearings in search for other primitive mammals to eat. All this history is encapsulated every year for an entire weekend in the Annual Old Naples Florida Festival.

Spanish Conquistadors, Seminole War Chiefs, soldiers in uniform from the Second World War and the Civil War of the mid-1800’s all come alive with festive colors as spectators composed of mainly families with their children enjoy the spectacular display of these historic reenactments. In two days, people can see demonstrations of the technologies, such as a sugarcane grinder from the 1800’s, that were used in the colonial period and offer a glimpse of the way people lived out their lives back then. Actors dressed according to their time-period reenact some key events that happened in the Seminole wars, the pioneering of Florida, American Civil War and World War II. There will also be live musical entertainment from local bands which are sure to keep the party going. Overall, the Annual Old Naples Florida Festival is a fun learning weekend for children and adults alike.

Onlookers who are interested in the history of World War II can marvel themselves around campsites that looked like the ones used that time and some of the weapons too; there’s even an actual war tank that you can take pictures of. If you’re lucky you may even get to see a firing demonstration using rifle models from the Civil War period complete with actors outfitted in uniforms with historical accuracy. Children get to pet horses that are part of the festival, since horses were vital in helping the war effort of the past centuries. Visitors may also get the chance to operate a sugarcane grinder that was used to make sugar and molasses cookies, a treat in the Civil War period.

Events from the Seminole wars were also enacted by actors dressed in colorful Seminole clothing. There was also the portrayals from the Spanish Conquista period when the Spanish fleet dominated the seas of the Carribean in 15-1700’s. And all the while local food vendors would set up stalls and special entertainment plus music from local bands add to the fun and excitement all around.

So, if you want a taste of the rich and vibrant history of Naples, Florida be sure to come by during the Annual Old Naples Florida Festival that happens in the Collier Museum just right at the Collier Government Center, 3331 U.S. 41 E. Should you need more information, head on to the Tourist Guide section in our website to learn more about schedules and dates of not just the Old Naples Florida Festival but with other events in the city as well. 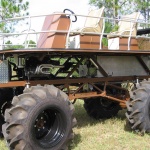 Swamp Buggies, How it all StartedArticles 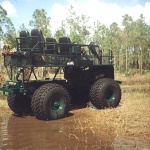 Do You Know What a Swamp Buggy is?Articles
This site uses cookies to improve the user experience, by continuing to browse this site you AGREE to our use of cookies.OK